Also known as non-duality teachings, or nondualism, the Perennial Wisdom Teachings are a collection of timeless truths contained within the major world religions and pointing to the unitive nature of perceived reality. These wisdom truths have been quietly studied, woven, and passed down through nearly all cultures. 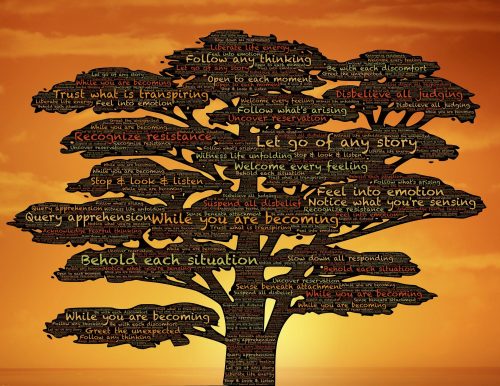 The teachings point to an impersonal oneness that has be examined, shared, and practiced by independent spiritual seekers for centuries. Based on the perennial wisdom philosophy, one perceives all of life as an impersonal unified, edgeless, seamless, appearance of emptiness appearing as fullness.

Agostino Steuco wrote in 1540 and published the Perenni Philosophia to show that many of the teachings of the sages, poets, and philosophers from classical antiquity were in essential harmony with the nondual teachings of  the Holy Bible’s New Testament Christianity. Through the centuries we’ve come to universally know these core tenets as the perennial wisdom teachings:

And while it may feel as though we have a personal self, a me, located at the center of what is perceiving, what we are is edgeless, empty, aware, stillness appearing as the paradoxical fullness of life.  These ancient teachings are confusing if this is your first exposure. These teachings were initially puzzling to me as well…yet revealed the deep inner peace beyond all understanding.

Believing you are a person with a brain/mind who thinks and understands that nothing can be known or understood isn’t the same as realizing there is no one to think or understand, or not think or not understand.  The belief of existing as a personal and separate self are what gives rise to the idea of having “a mind”  as the mind is not tangible or visible to the human eye or on imaging equipment.  It is a conceptual consensus idea and belief of most humans.

Of course, seeing this…intense fear often arises…which is the egoic mind at work creating and reinforcing the sense of being an individual self, reasserting itself, not wanting to yield to the appearances of an infinite and edgeless aware presence.

Thinking…simply…appears…uncaused, just like breathing, just like clouds appearing upon a vast sky. Thinking is not a problem. Believing thoughts to be real and belonging to a you is what brings personal suffering.

As Rabbi Rami Shapiro explains it, “Perennial wisdom isn’t unique to any specific system of thought or belief, but rather a set of teachings common to all of them. Each articulation of perennial wisdom takes on the flavor of the system in which it rests. Mistaking the flavor for the substance leads us to imagine differences where none exist.” [1]

“ You can call it the collective unconscious; you can call it globalization; you can call it the One Spirit of God—the question is, why are so many people from different cultures, countries, ethnicities, educations, and religions saying very similar things today? This really is quite amazing and to my knowledge has no precedent in human history.

We are rediscovering the philosophia perennis, the perennial philosophy—an early nineteenth-century phrase that pointed to an idea of a shared universal truth. Some of us called it the “wisdom tradition” which keeps showing itself in all of the world religions throughout history. This wisdom cannot be dismissed as mere syncretism—a word sometimes used to dismiss something unfamiliar or different as merely lightweight thinking, skepticism, or just wrong.

Too many of God’s holy people from other “flocks” keep saying the same or very similar things for them to be false. Hearing the same thing in different language and images helps us see the same reality more clearly. It is like the blind men walking around the proverbial elephant and touching different parts of the one huge body of Christ.” [2]

Another way to summarize the perennial wisdom (to paraphrase Aldous Huxley) is: