The first time I heard that a belief in a personal self was the root cause of all suffering I could hardly breathe. That’s just blasphemy, right? How could I not be a separate person?  Life to me feels tangible.  My hand moves towards my face and makes contact with my skin.  Am I not real?  I feel real and lasting, and tangible and separate from you.  Is my body, mind, and spirit lying to me?  Is this all a play of light and shadows, and I nuts?  I feel the sensation of being me, myself, and I believe I am authentic and real.

Jesus, the Buddha, and Rumi  repeatedly write that life is a seeming, a simple illusory play of impersonal consciousness in a dream of itself.  This was the biggest shock of my life.  These deeply spiritual and mystical teachings and writings from Jesus the Christ, the Buddha, and Rumi the mystical poet are not a religion nor a philosophy.  There are no teachers, no gurus, no practices, no rules to follow, no doctrines to deliver.

The only foundation of nonduality, if there could be such a thing as a foundation, is to look within and find the origins of the personal self upon which sit the whole belief of being a separate person, a separate identity.  Locate this one original root belief and sit with it, meditate on it and deeply inquire as to what holds this belief together for you.  Find all these evidence that makes you be a lasting and solid you.  Find this root and do not let it go until you have exhausted every ounce of your commitment to finding Truth.  Explore until reaching the  Absolute truth and leave no stone unturned.  I’m not speaking here of evidentiary truth or relative truth.  I’m pointing you towards uncovering the Absolute truth, the Truth beyond the relative world of time, of this and that, of here and there.  Explore the mental terrains of the mind until you uncover the TRUTH of what is appearing, of self, of being, of the Universe. 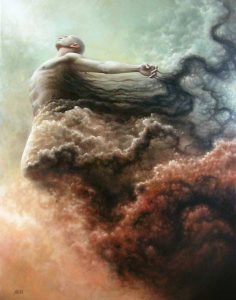 For me, when I was seeking to know what is absolute and not relative, I started with my thinking patterns, my thought stream.  I knew the back of the book answer – my thoughts are not personal.  I had to sit with that bombshell for a few months.  What am I if I am not my personal thoughts?  This idea is impossible, and how could it ever be? My head was spinning.  Eventually, with great effort and determination, I began to experience the falling away of many beliefs that I had assumed were solid and true.   I clearly saw that what I believed as true, real, and solid, were simply smoke and mirrors projected and held tightly by the brain/mind to perpetuate the illusory nature of being Anita as a separate person.

I would have called you insane if you had offered this challenge to me prior to crashing into the Perennial Wisdom Teachings of Jesus the Christ, the Buddha, and Rumi the Poet.  I did not know there was a way to understand the paradox of these mystical teachings.  I was curious and this curiosity paid off as my brain was willing to entertain the possibility that the Sages were pointing to a Truth that is beyond the relative world of this and that.

The bottom line, what I finally uncovered is that I am, and have always been, an illusory character in an illusory dream of creation, and, truly, not even that. I was never born and I will never die….I am an illusion, a misperception, a wind blowing through the trees at sunset, and not even that.  Who would write or purchase books on such a dreary and tragic topic? Right, that’s why now the watered down oneness and nonduality pablum is so popular…”you” can continue believing “you” are real and then dwell in the everlasting after “you” cease to appear.  This is not the Truth.  Jesus the Christ offered the Truth as did the Buddha and many other sages.  Many sages and saints were persecuted, despised, and killed for uttering their words of Truth.  Remember, we must not upset the status quo, the cherished traditions, the theories and stories that elevate humans to cherished elevations.

Here is the place where you gather some courage to read what may sound illogical and paradoxical to your relative-based brain.  This is the reason great sages spoke in paradoxical phrases, used mind twisting scenarios, used parables, and stories to make you pause, stop, and think differently for a moment. Often these nondual and oneness teachings were opposite of traditional and conventional wisdom.

Join me on this journey to uncovering how humans think, how we perceive, and how we draw conclusions to create our worlds.  It’s a fascinating journey to explore the true nature of reality when you are able to see and perceive from the different vantage points offered to us now by physics, scientists, and our favorite religious traditions.  Re-seeing and perceiving, with a new understanding of our traditional religious beliefs from this new view of physics shows us that Jesus the Christ, the Buddha, and Rumi the Poet were spot on when they declared that what we see is an infinite, edgeless, Oneness.