“If you seek reality you must set yourself free of all backgrounds, of all cultures, of all patterns of thinking and feeling. Even the idea of being man or woman, or even human should be discarded. The ocean of life contains all, not only humans. So, first of all abandon all self-identification, stop thinking of yourself as such-and-such or so-and-so, this or that. Abandon all self-concern, worry not about your welfare, material or spiritual, abandon every desire, gross or subtle, stop thinking of achievement of any kind. You are complete here and now, you need absolutely nothing.”

Many pilgrims inquire about Absolute or God when plowing through mountains of beliefs and concepts pertaining to the spiritual life, existence, and the afterlife. It seems there is nothing scarier than to ponder an endless oblivion at the end of living.

As humans, feeling there is something more after death, and believing in an enduring personal soul or spirit in an afterlife seems to draw and sustain many to God.  I certainly believed this as I applied a Christian framework onto God for more than 40 years. God was like a devoted loving parent, promising an afterlife in Heaven, if all the dogma and doctrines were practiced and obeyed. 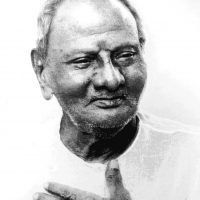 The belief in a personal soul that would unite with God upon physical death and spend eternity with God in an afterlife was at the core of the beliefs. Upon reflection and inquiry, the concept of God implied that God was changeable, flexible, and able to exist in a relative relationship  –  God and other – creator and created – bound together in a relationship (relativity) enduring through time.

There was a clear line of who was with God and who was not with God, and it all depended on a particular set of beliefs and an allegiance or commitment to those beliefs. This pilgrim even taught this doctrine to children and adults in Sunday School classes for decades.

And then the urge for teaching fell away during the long passage of the dark night of the soul. Afterwards, life and existence  were viewed from a different lens, a new and impersonal perspective, when relativity fell away and was seen to be a mere belief arising on a framework of subject and object. You and me. Up and down.  Here and there. Now and later. Good and bad. Birth and death.  Past and future. God and not God.

For instance, we used to believe the world was flat and now we no longer believe this.  We used to believe that man could not fly, until in seven short seconds, Orville and Wilbur instantly changed our beliefs. And mankind would never walk on the moon, until we did. And we’ll never make it to Mars…

But now science is moving us into the fluid world of quantum physics…moving consciousness beyond relativity and into empty particles, dark matter, and entanglement. This is the fascinating world of exploring the nature of invisible particles and matter changing just by being observed.

The issue with quantum physics is the same as the issue with all science dealing with relativity – that the quantum scientists and physicists are assuming that the consciousness that is observing matter or energy through the microscope (or telescope) is a personal consciousness within them. Obviously this skews the observation – and adds a layer of misinformation to the observation.

I spent years meditating and praying about how to reconcile the scientific facts with spiritual beliefs.  i had been deeply spiritual all my life and who was i if i was no longer spiritual in the way i was accustomed?  And who was i in relation to what science calls dark energy, which comprises 95% of the cosmos?

And then the mystical teaching of Christianity and all the scientific information around quantum physics began to make so much more sense within the logical brain. St. Teresa of Avila and St. John of the Cross wrote at length about the illusory nature of the separate or personal self and their teachings lined up with the ancient teachings of  Nisargadatta Maharaj, Lao Tsu, the Buddha, Jesus the Christ, and Wu Hsin all described the ineffable, unchanging, omnipresent, and timeless attributes of an Absolute God. An Absolute God or consciousness resonated in the heart, down into the bones and marrow.

Yes, it makes logical and scientific sense to see and imagine God as Absolute and not relative.  Absolute, the word itself, by definition, is not measurable, is not relative, is beyond time, space, and location, is not changeable, is not endowed with human characteristics, is not quantifiable, is not able to be parceled or separated in any way.

In short, all matter and energy is consciousness or Absolute. Absolute experiences itself through the duality of consciousness projecting every-thing-ness concurrently as omnipresence. Every expression of form and formless is impersonal consciousness. Consciousness, Cosmos, Universe, Dark Energy….it’s all consciousness, and words fail miserably to describe the indescribable.