I started practicing yoga and meditation in 1992 to learn to relax my panic filled body. I could not sleep deeply, I was not eating healthy foods, and I was a mess.  Several friends and counselors recommended I attend some yoga and meditation sessions at the Kadampa Center in Raleigh, NC.  This Buddhist Center was founded in 1992 by Lama Thubten Zopa Rinpoche and is a member of the Foundation for the Preservation of the Mahayana Tradition and is in the lineage of His Holiness the Dalai Lama. 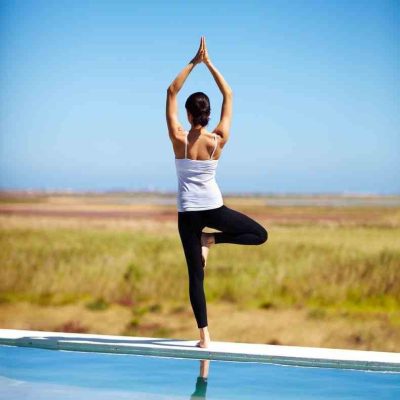 At the Kadampa Center I took classes to learn simple yoga stretches after meditating and these stretches felt soothing and relaxing for my body.  Yoga was not, at that time, on the radar for average people like me. It sounded too exotic and woo-woo.  Little did I know with yoga and meditation I was embarking on a 30-year practice of wellness.  My initial motivation for exploring a yoga practice was to quiet the voices in my head, or at least watch them as they spewed their fear and anxiety.  I also suffered with panic attacks, agoraphobia, and Post Traumatic Stress Syndrome.  I could not get out of my own way.

It’s interesting now to see how widely science substantiates the many benefits of yoga and meditation. Perhaps this will encourage others to begin a daily or weekly yoga and meditation practice.  Below is an article from the National Center for Complementary and Integrative Health (NCCIH) about yoga that helped me grasp the scope of the benefits of a regular yoga practice.

Yoga for Children and Adolescents

The American Academy of Pediatrics (AAP) recommends yoga as a safe and potentially effective therapy for children and adolescents coping with emotional, mental, physical, and behavioral health conditions. Yoga can help children learn to self-regulate, focus on the task at hand, and handle problems peacefully. Yoga may also improve balance, relieve tension, and increase strength when practiced regularly. Because some yoga poses are harder than others, the AAP cautions that even children who are flexible and in good shape should start slowly.

What Does the Research Show?

A 2015 systematic review of 16 studies (including 6 randomized controlled trials, 2 nonrandomized preintervention-postintervention control-group designs, 7 uncontrolled preintervention-postintervention studies, and 1 case study) for yoga interventions addressing anxiety among children and adolescents concluded that nearly all studies included in the review indicated reduced anxiety following a yoga intervention. However, the reviewers noted that because of the wide variety of study populations, limitations in some study designs, and variable outcome measures, further research is needed to enhance the ability to generalize and apply yoga to reduce anxiety.

Older adults who practice yoga should put safety first. It’s a good idea to start with an appropriate yoga class—such as one called gentle yoga or seniors’ yoga—to get individualized advice and learn correct form.

Chair yoga is an even gentler option for seniors with limited mobility. And it’s important for older people with medical issues to talk to both their health care providers and the yoga teacher before starting yoga.

What Does the Research Show?

Yoga for Health and Well-Being – Only a small amount of research has investigated yoga for general well-being, such as improving sleep and reducing stress, and the findings have not been completely consistent. Nevertheless, some preliminary research results suggest that yoga may have several different types of benefits for general well-being.

Yoga and Stress Management – Some research indicates that practicing yoga can lead to improvements in physical or psychological aspects of stress.  Yoga has not cured my addiction to ice cream, unfortunately.

Yoga and Balance – Several studies that looked at the effect of yoga on balance in healthy people found evidence of improvements.

Positive Mental Health. Some but not all studies that looked at the effects of yoga on positive aspects of mental health found evidence of benefits, such as better resilience or general mental well-being.

Health Habits. A survey of young adults showed that practicing yoga regularly was associated with better eating and physical activity habits, such as more servings of fruits and vegetables, fewer servings of sugar-sweetened beverages, and more hours of moderate-to-vigorous activity.

But it wasn’t clear from this study whether yoga motivates people to practice better health habits or whether people with healthier habits are more likely to do yoga.

In another study, however, in which previously inactive people were randomly assigned to participate or not participate in 10 weeks of yoga classes, those who participated in yoga increased their total physical activity.

Quitting Smoking. Programs that include yoga have been evaluated to see whether they help people quit smoking. In most studies of this type, yoga reduced cigarette cravings and the number of cigarettes smoked. Findings suggest that yoga may be a helpful addition to smoking cessation programs.

Weight Control. In studies of yoga in people who were overweight or obese, practicing yoga has been associated with a reduction in body mass index. An NCCIH-supported comparison of different yoga-based programs for weight control showed that the most helpful programs had longer and more frequent yoga sessions, a longer duration of the overall program, a yoga-based dietary component, a residential component (such as a full weekend to start the program), inclusion of a larger number of elements of yoga, and home practice.

Yoga may help relieve low-back pain and neck pain, but it has not been shown to be helpful for some other painful conditions such as headache, arthritis, fibromyalgia, or carpal tunnel syndrome.

Fibromyalgia. Recent systematic reviews and randomized clinical trials provide encouraging evidence that some mind and body practices such as yoga may help relieve some fibromyalgia symptoms.  In 2017, the European League Against Rheumatism (EULAR) evaluated non-pharmacologic therapies, including complementary health approaches, and issued revised recommendations for the management of fibromyalgia.

A 2015 Cochrane review of 61 trials involving 4,234 predominantly female participants with fibromyalgia concluded that the effectiveness of biofeedback, mindfulness, movement therapies (e.g., yoga), and relaxation techniques remains unclear as the quality of evidence was low or very low.

A 2018 report by the Agency for Healthcare Research and Quality evaluated 8 trials of yoga for low-back pain (involving 1,466 total participants) and found that yoga improved pain and function both in the short term (1 to 6 months) and intermediate term (6 to 12 months). The effects of yoga were similar to those of exercise.

A 2017 Cochrane review of 12 trials involving 1,080 participants found low- to moderate-certainty evidence that yoga compared to non-exercise controls results in small to moderate improvements in back-related function at 3 and 6 months. Yoga may also be slightly more effective for pain at 3 and 6 months, however the effect size did not meet predefined levels of minimum clinical importance.

Neck pain. There is some limited evidence that yoga may provide short-term improvements for neck pain.  A 2017 review of 3 studies (involving 188 total participants) found that yoga had short-term benefits for both the intensity of neck pain and disability related to neck pain

Headache. Only a few studies have been conducted on yoga for headaches, so there aren’t enough data to determine if yoga has beneficial effects for this pain condition.

A 2015 attempt to review the research on this topic found only one study with 72 participants that could be evaluated. That study had favorable results, with decreases in headache intensity and frequency.

Arthritis. Results from clinical trials suggest that some mind and body practices, including yoga, may be beneficial additions to conventional treatment plans for patients with arthritis, but some studies indicate that these practices may do more to improve other aspects of patients’ health than to relieve pain.

A 2017 review of two studies found some beneficial effect on pain, but due to the high risk of bias in both studies, the reviewers gave a weak recommendation for yoga in rheumatoid arthritis. Yoga incorporates several elements of exercise that may be beneficial for arthritis, including activities that may help improve strength and flexibility.

Yoga for People with Chronic Diseases

Cancer. Quite a few studies have been done on yoga for people with cancer, especially on women with breast cancer. These studies have produced some evidence that yoga can help improve quality of life and reduce fatigue and sleep disturbances. Other forms of exercise may have similar benefits.

Multiple Sclerosis. A small amount of research in people with multiple sclerosis found that yoga has short-term benefits on fatigue and mood, but it doesn’t affect muscle function, reasoning ability, or quality of life. The effects of yoga on fatigue are similar to those of other kinds of exercise.

Chronic Obstructive Pulmonary Disease (COPD). Studies in people with COPD have shown that yoga may improve physical ability (such as the capacity to walk a certain distance in a specific length of time), lung function, and quality of life.

Asthma. Studies of yoga in people with asthma have shown that it probably leads to small improvements in symptoms and quality of life.

Yoga for Other Conditions

Anxiety or Depression. Yoga may be helpful for anxiety or depressive symptoms associated with difficult life situations. However, the research on yoga for anxiety disorders, clinical depression, or posttraumatic stress disorder (PTSD), although mildly positive, is still very preliminary.

Diabetes. Some research has suggested that participating in yoga programs is associated with better blood sugar control in people with type 2 diabetes, at least on a short-term basis.

Irritable Bowel Syndrome (IBS). Some research has suggested that yoga may help to decrease IBS symptoms and severity, but the findings aren’t strong enough for definite conclusions to be reached.

Sleep Problems. Some research has indicated that practicing yoga may improve sleep in a variety of groups of people, including people with cancer, older adults, people with arthritis, pregnant women, and women with menopause symptoms.

Yoga is generally considered a safe form of physical activity for healthy people when it’s done properly, under the guidance of a qualified instructor. But it’s possible to get hurt practicing yoga—just as when participating in other physical activities.

Older adults, women who are pregnant, and those who have health conditions should discuss their needs with their health care providers and yoga instructor. They may need to modify or avoid some yoga poses and practices.

The National Center for Complementary and Integrative Health is dedicated to exploring complementary health products and practices in the context of rigorous science, training complementary health researchers, and disseminating authoritative information to the public and professionals. For additional information, call NCCIH’s Clearinghouse toll-free at 1-888-644-6226, or visit the NCCIH website at nccih.nih.gov. NCCIH is 1 of 27 institutes and centers at the National Institutes of Health, the Federal focal point for medical research in the United States.

Content for this article is in the public domain and may be reprinted, except if marked as copyrighted (©). Please credit the National Center for Complementary and Integrative Health as the source.